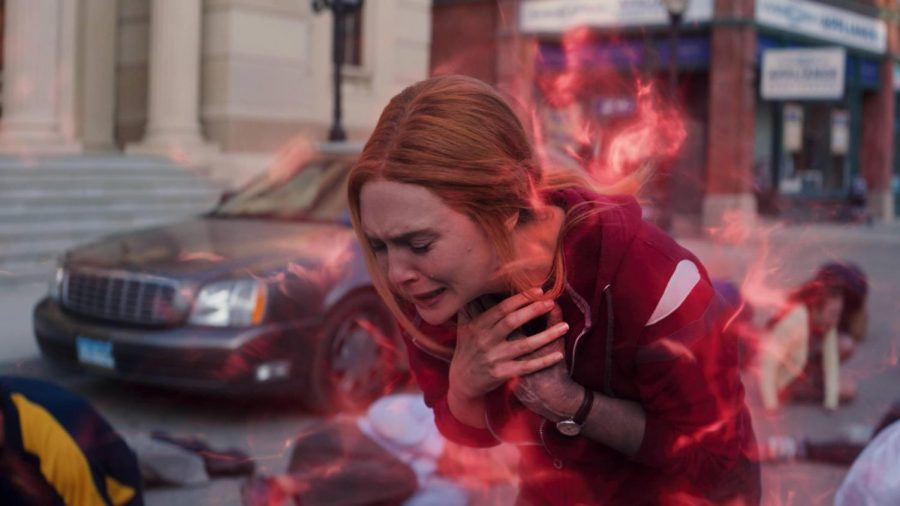 This is it, folks, the final episode of “WandaVision.” Will our biggest questions be answered? Will there be even more big reveals? Was Mephisto behind it all along? Is Evan Peters the Fox Quicksilver? And is Wanda ever gonna learn not to take people hostage?

I’m Bryce Rennick with your weekly review of “WandaVision.” Last week’s review was released way later than expected, so this week, I’m trying to get this out as quickly as possible so you, dear reader, still know what’s going on in the MCU and with the now-officially-called-by-her-comic-book-name Scarlet Witch.

For now, let’s start with the episode.

Agatha is holding Billy and Tommy hostage. Wanda is struggling to get them back. Agatha reveals to her that she knows about the power Wanda possesses and wants it, all of it. Wanda isn’t ready to give up her little reality yet, so what does she do? She chucks a car at Agatha.

Suddenly, White Vision floats down, walking up to Wanda and caressing her cheeks. Wanda closes her eyes, feeling safe in the true body of the person she loves, but she opens them again to realize that White Vision is crushing her skull. She tries to escape but is saved by her Hex Vision, who goes head to head with his “real body” counterpart.

For the rest of the episode, it’s pretty much just a huge CGI fight. Wanda and Agatha try tricking each other with their spells, Vision and White Vision phase through each other and then talk about philosophy, and Billy, Tommy and Monica deal with the S.W.O.R.D. agents who are willing to shoot two young children.

What’s important here are the outcomes of each fight.

Vision convinces White Vision that he is being played by Hayward, then gives him memories of the past, hinting at the fact that White Vision is pretty much just normal Vision now since he has a little part of him. Billy, Tommy and Monica all use their newfound powers to stop the bullets and the S.W.O.R.D. agents, with Tommy grabbing one of their hats and wearing it, which is a nod to “X-Men: Days of Future” past, in which Evan Peters’ Quicksilver did the same thing. Then there’s Wanda, who tricks Agatha by using the same ruins that were used on her before, blocking out all other magic that isn’t her own. Wanda comes into her own, becoming the Scarlet Witch, and trapping Agatha into a “sitcom-like” form of living.

In the end, Wanda gets rid of the Hex. Her Vision, Billy and Tommy are all gone now, and she is left by herself to deal with the townspeople she affected. They stare at her in fear, and Monica tells her how they understand her pain (which is stupid because she literally physically and mentally abused them). The final shot of the show is Wanda leaving Westview to go off to better places in the world, wherever they may be.

Now, for the mid- and post-credits sequences. The mid-credits scene shows Monica talking with a Skrull, telling her she’s needed in space. This is our setup for “Captain Marvel 2.” Not much else to say about this other than that I’m loving her character and inclusion in the MCU, so let’s get more Monica.

For the post-credits scene, we see Wanda is living out in the middle of nowhere, in between some huge mountains. She has a cute little cabin, she’s sitting on the porch and gets up to get some tea from the kettle, but then we see her astral form reading the Darkhold. For those who don’t know what it is, the Darkhold is an ancient book that holds unspeakably powerful magic. It was confirmed earlier in this episode that Agatha had the Darkhold, and now Wanda has stolen it. As the camera zooms in on Wanda, we hear Billy and Tommy’s voices crying out to their mother.

Now that that’s all out of the way, I want to give some closing thoughts on the series before I wrap this up. “WandaVision” did a lot of things that past MCU installments had not done. It showed the audience an in-depth look into one of it’s star characters, it set up way more than anyone was expecting and brought in a familiar face from Fox’s X-Men movies. There were happy introductions, sad goodbyes and unnerving reveals.

My biggest problem with the series overall is that, even though the ending was good in its own right, I step away wishing there was more. I was expecting Mephisto or some other big Doctor Strange/magical baddie, or something multiverse-related. Sadly, we didn’t get any of that. Evan Peters’ Quicksilver was nothing more than a cameo and a fun nod to the Fox movies, and there’s still no sign of Mephisto. The only thing that could point to Mephisto is the post-credits scene with Billy and Tommy’s voices. If they are still alive (somehow), then they must be connected to someone we haven’t seen yet, and in the comics they have fragments of Mephisto within them.

But I still enjoyed the series. It was worth every moment, even if there isn’t going to be any X-Men/Multiverse crossover… yet.

Catch all of “WandaVision” on Disney+.