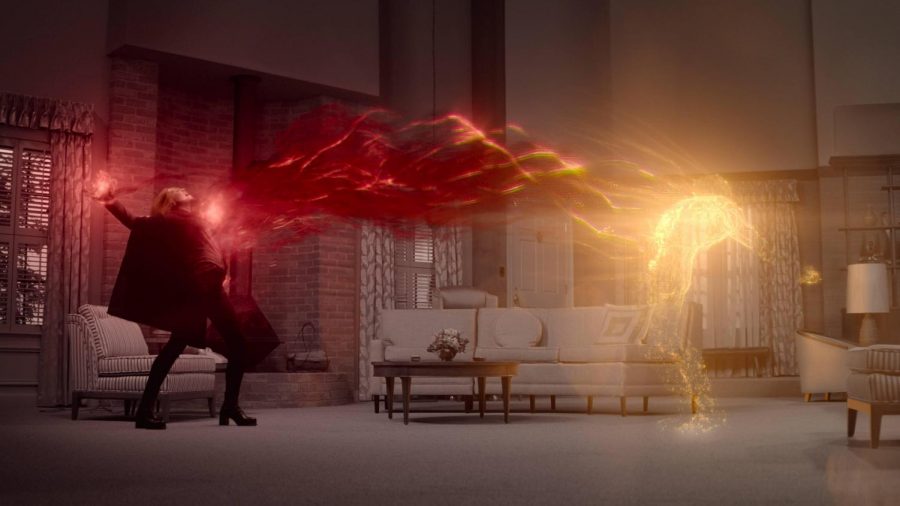 Welcome back, everyone, to this week’s “WandaVision” review/recap. I’m Bryce Rennick, and with only one more episode to go, things in Westview are heating up. We’ll be going over episode eight, but also any final predictions that are out on the internet, just to go over everything before the ultimate fight for Westview.

We are introduced with Agatha’s backstory, being “burned” at the stake by other witches. It’s shown off the bat that Agatha is a different breed of witch when she absorbs the powers of the others and drains their life force. She escapes their bondage and is forced to kill her own mother, since she tried to kill Agatha along with the others. Her mother talks about Agatha having learned some dark and forbidden magic, which is against their law. This may be useful knowledge in the coming moments before the finale.

Now back to the present. Agatha tells Wanda she needs to know how she created Westview and the Hex. Wanda won’t tell because she herself doesn’t really know. Agatha doesn’t like this answer, so she sends both of them back through Wanda’s past. We see Wanda, Pietro and their parents watching sitcoms when she was younger, giving a hint why Wanda has been picking only sitcom-like realities. Then a Stark bomb hits their home, the impact instantly killing their parents. Before the bomb can explode, though, young Wanda holds out her hands and seems to stop it from detonating, pointing to the fact that she might have already had her abilities when she was young (a.k.a. a mutant).

Next, they move forward through the past to see Wanda when she was with Hydra and had her first experience with the Mind Stone. The stone floats in front of her and reveals an image of her future self, which seems to be in a costume that resembles the one she wears in the comics. After that, Agatha and Wanda visit her time at the Avenger’s compound with Vision. There’s a sweet little scene where Vision (awkwardly) consoles her over the death of Pietro.

Then Wanda takes them straight to the moment Wanda went into S.W.O.R.D. HQ to steal Vision’s body. She asks for Hayward, who allows her in. She tells Hayward she wants to have a burial for Vision, and Hayward tells her there’s no way they will bury three billion dollars worth of advanced technology. Wanda is displeased with this, breaking the glass and floating down to see a broken-apart Vision. She uses her powers to sense his presence, only to find there is nothing there. She leaves the building, but without Vision’s body.

Hayward had been the lying the whole time.

And Hayward had always had it.

Wanda leaves for Westview, a small town in New Jersey. She watches the townspeople as she drives through, ending up at a small property Vision bought for them before he died. Wanda begins to cry, then spontaneously creates the Hex. At the same time, she conjures a new Vision, one she did not steal and who will love her just like the old one did.

With this information, Agatha tells Wanda she is a powerful being, one that could only be of myth and legend. She is the Scarlet Witch, a being with the ability of spontaneous creation.

But that is not where the episode ends.

We are given a mid-credits scene revealing one of Marvel’s biggest cards, Paul Bettany’s teased cameo as White Vision. For those who don’t know who White Vision is, he’s from the West Coast Avenger’s story line “Vision Quest.” Vision loses his humanity and is turned into a terminator, basically.

With this, we’ll start seeing Marvel get into some of their more “nerdy” roots. Personally, I’m very excited to start seeing this kind of stuff — the kinds of developments that seem so out of left field they make you go, “What’s with this?” but then you do your research and realize, “This is something from the comics!” I just have a feeling we will see Hex Vision and White Vision fight it out.

Well, that’s all I have for right now. “WandaVision’”s finale will be one to keep in the books. Catch “WandaVision” on Disney+.