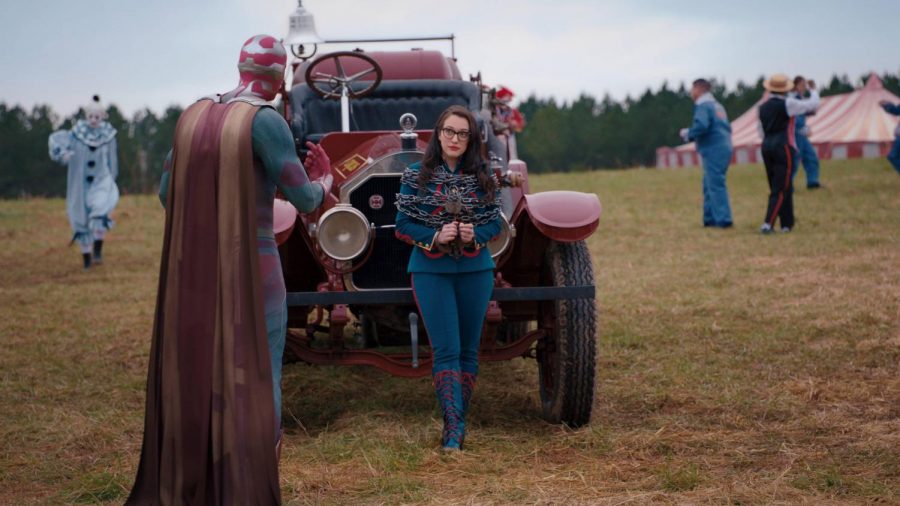 Big reveals and hidden agendas: this last week’s episode of “WandaVision” started out a little slow, but it soon pulled the rug from under our feet. I’m Bryce Rennick, your key to the nerd world, and today we’ll be talking about everything BIG that happened in this last episode.

I’d actually like to start this review with a little personal story. It was Saturday, I was chilling, and saw I got a text from one of my friends. This friend of mine isn’t really into comics; he just watches the show because it’s Marvel (and because his girlfriend likes it), nothing more to it. So I wasn’t surprised when his text read, “Dude, what’s with all the witches and where’s that engineer you keep talking about? And what’s with that one girl with the glowing eyes?”

That’s what we’ll be talking about today. But first, let me recap.

Like I said before, the episode starts out slow. Wanda is becoming more and more depressed, Vision teams up with Darcy, Billy and Tommy notice the world their mother created is slowly falling apart and Monica meets with a team who has her rover for her. This next part is when things get interesting: Monica goes into the Hex again, but this time develops power, meaning we finally have Spectrum in the MCU (which opens up a lot of doors for the future!). Monica goes to Wanda to tell her what’s happening in the outside world, but Agnes pulls Wanda away and takes her to her own house. While at Agnes’ place, Wanda does some snooping around, finding Agnes’ secret basement dungeon, and it is revealed that Agnes is actually the witch Agatha Harkness.

So, let’s start with the big two things here: Monica and Agatha. Both were obviously coming our way. Monica getting powers shouldn’t surprise anyone because she literally has them in the comics and joins a bunch of different teams. She was first seen in “The Amazing Spider-Man Annual #16,” first released on December 1st, 1982. She’s been a thing for a long time, so seeing her finally join the MCU with her powers is pretty exciting.

Now to Agatha. This was a little less obvious, but I (and many others) were saying this would happen. Agatha plays a big part in Wanda’s personal stories and within the Marvel universe itself. She usual acts as a neutral figure and sometimes even as one of the good guys, but that doesn’t mean she has benevolent intentions. She usually does things to gain power for herself, and will only help the good guys if it benefits her. Now that she’s officially in, we’ll start seeing a lot of those connections that she has to the different teams and people in the MCU, one of them being the Fantastic Four.

For the last part of this week’s review, I want to take a moment to discuss the aerospace engineer, and one possibility that another friend of mine pointed out.

It could just be a random person.

This episode, we were introduced to a random character who seems to be in charge of the team that got Monica her rover. She can be completely random and just thrown in there, but I highly doubt it, since it’s been hinted at as a big thing for two episodes now. I think it’s actually one of two things. (1) We haven’t seen the engineer yet and they will be appearing soon, or (2) Skrulls.

For those who don’t remember who Skrulls are, they are an alien species that can change their form. We’ve already seen them in the MCU, and in “Captain Marvel” when a young Monica Rambeau bonded with a young Skrull child. Maybe those two became good friends, stayed in touch and now help each other out.

That’s all I got for this week. We were given such a great episode that yet again opened even more doors for us to discover in the future. Catch “WandaVision” on Disney+.