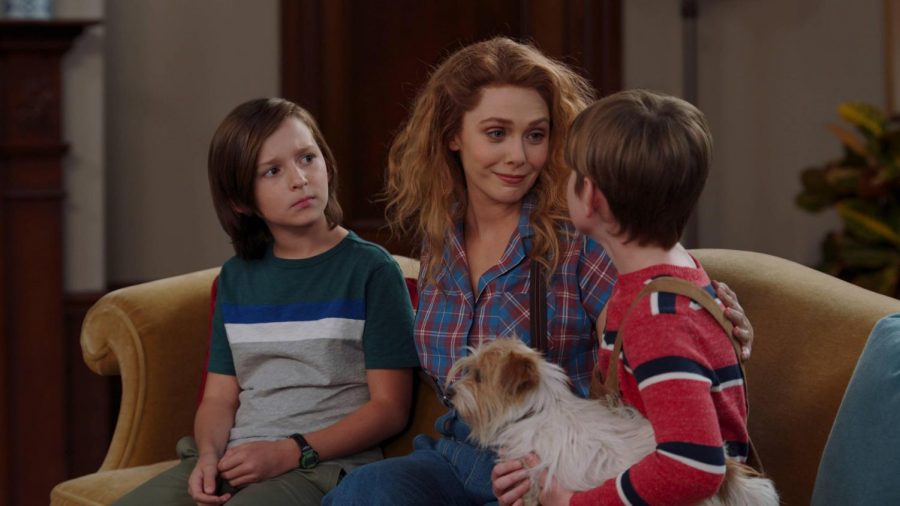 This week’s episode of “WandaVision” marks a momentous first step of sorts for the Marvel Cinematic Universe, giving us a new idea of where the MCU is headed and what we’ll be seeing in the next few years. I’m Bryce Rennick, and let’s just get into the “WandaVision” episode 5 recap.

Before we get to the “big cameo” at the end of the episode and talk about what that means and where it will be taking us, let’s get the story out of the way. We get thrown into the ’80s era of television sitcom with a “family-centered” episode that teaches a good lesson towards the end. We open up with Wanda holding one of her newborns, begging him to go to sleep. Vision walks down the stairs with the other baby, telling Wanda that reading Darwin’s “Descent of Man” didn’t work.

This little line here has fans pointing to a lot of different reasons why it may be important, but my personal favorite (and the reason that seems most likely) is that it could be a connection to mutants, since in the Marvel universe, mutants, or “homo-superior,” are the next step in human evolution. Darwin is famous for his theory of evolution, and that’s why this connection makes so much sense to me.

Next we see Agnes come by and offer to babysit, which is yet another clue to her being Agatha Harkness, since she was the babysitter to Franklin Richards. Vision is frightened by this idea of her babysitting and tells her no, which is when things get awfully strange. Anges looks to Wanda and asks, “Okay, should we redo that?” as if she’s acting. Notice, she looks to Wanda as a director, seeing what she wants her to do. Wanda tells Vision, “Let’s just try it out.” Then, after a small conversation and noticing the babies are gone, they find that Billy and Tommy have grown five years in the span of two seconds. This raises some questions — but then we go to the intro.

The intro has dozens of references here, mainly ones to “Family Ties,” “Growing Pains” and “Full House.” The other references are from shots and different camera angles, mirroring how shows from the ’80s used to film.

Now we go to S.W.O.R.D. and see Hayward showing his team classified video footage of Wanda stealing Vision’s body from S.W.O.R.D. HQ. This begs the question: What were they doing with Vision’s body? Especially after Hayward says that Wanda is going against Vision’s own will by not letting his body become a weapon — but what else would S.W.O.R.D. want him for if it isn’t for weapon parts?

Back in Westview, Billy and Tommy reveal that they’ve found a dog, who they name Sparky. When Wanda and Vision walk in to find their newest family member, Agnes randomly walks in with a doghouse, causing Vision to ask, “How did she know we needed a doggy house?” Wanda and Vision then look to their boys and tell them that they can have a dog when they’re around ten years old — then Billy and Tommy suddenly age to ten, right in front of Agnes.

We get a few more scenes with Monica, Darcy and Jimmy, figuring out that Wanda was able to manipulate Monica’s bulletproof vest to look like something from the ’70s. During this conversation, they say they will need an astroengineer for future plans, with Monica saying, “I know someone.” There are many who think that person would be Adam Brashear or Reed Richards. They finally realize that to get into Wanda’s forcefield, they’ll need tech that compliments the era that Wanda and Vision are in at that moment.

Vision’s at work when he gets a strange email from S.W.O.R.D. telling him about what’s happening on the outside. This causes him to worry and speak with one of the town’s people free of Wanda’s control. He learns that they are scared, that everyone is scared, and Wanda seems to be in the middle of it.

Wanda has a conversation with Billy and Tommy about her brother, Pietro, and how she misses him deeply, until she hears a humming outside. She finds that S.W.O.R.D. has sent in a drone that was build in the ’80s, so it’s not being changed by Wanda’s powers. She destroys it and leaves the forcefield for a bit to talk to Hayward and the others. She tells them to stay away, that they are trespassing into her reality.

She returns back to Westview to search with Tommy and Billy for Sparky, who has run away. They find Agnes holding a dead Sparky, telling them, “He had already eaten too many of the leaves.” Billy and Tommy beg Wanda to bring Sparky back to life, but she tells them she won’t.

This next part is where history is made.

Vision confronts Wanda about what he has learned and how he feels about the town, that nothing is right and they are in trouble. He tells her he knows she’s involved and wants to know why and how, but Wanda blows him off and starts the credits to shut him out. He continues to talk with her, now panicking about how little he knows about his life. They both go into battle-ready mode, but stand down, knowing it wouldn’t end well for either of them.

Then the doorbell rings.

Vision tells Wanda to knock it off, but Wanda tells him she didn’t control that. She goes to the door and is greeted by a familiar but unfamiliar face.

This is history right here, but not because it’s Quicksilver. Of course we would have Quicksilver — he’s her brother. It’s the fact that he’s played by Evan Peters that makes this so important. Evan Peters played Quicksilver in Fox’s X-Men movies, which weren’t connected to the MCU because Fox owned the movie rights to the X-Men. Now that Disney owns Fox, they can use the X-Men however they want.

And this first appearance of an actor from the Fox movies in the MCU tells us that the Fox X-Men movies are relevant. The question is, how far does this relevance go? As of right now, it’s only relevant because of the actors, so we can see some more X-Men actors and actresses, but is Evan Peters’ Quicksilver in the MCU because of the Multiverse? Will we get the X-Men through the Multiverse?

I have no idea at this moment, but I am happy nonetheless. As a big X-Men fan, I’m happy to finally see the first steps toward getting mutants into the MCU. Catch “WandaVision” on Disney+.