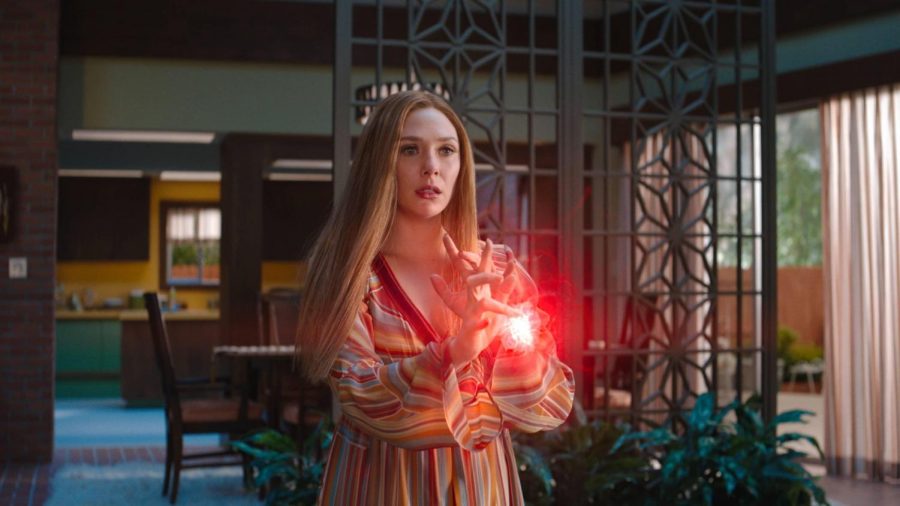 We got a lot to talk about in this review of “WandaVision,” folks, and not just in-show-related news. I’m Bryce Rennick, your ambassador for the nerdiness, and today we’ll be talking about the fourth episode of “WandaVision.” I’ve been told that now, since we’ve gotten a few episodes under our belt and understand that this show isn’t just for the general public, and more for the geeks, I am allowed to start going deeper with my observations. I’ll be relating to the comics a lot more, as well as rumors and theories out there. With that being said, let’s see what this episode had for us.

We got duped this week and did not get the ’80s episode we all thought we’d get. So far, it’s been ’50s, ’60s and ’70s, but no ’80s for right now, because we got something that was more needed and helpful to the understanding of what’s happening in the story: we got a full overview of what’s been happening outside of Wanda’s sitcom world, plus a look at S.W.O.R.D. (Sentient Weapon Observation and Response Division).

For those who don’t know what S.W.O.R.D. is, it’s basically the S.H.I.E.L.D. equivalent for threats outside of Earth. They deal with aliens, world conquerers, celestials and other troubling-making issues that weren’t born on Earth. It makes a lot of sense that they’d be involved, since no one has any idea who is causing the situation in the show. It could be anyone or anything, but we’ll get to that a little later.

We start with Monica Rambeau, who is coming back after being dusted. We learn very quickly that her mother, who has died, was the founder of S.W.O.R.D, and we learn that Monica herself is an agent of S.W.O.R.D. She meets with acting director Tyler Hayward, who gives her a rundown of the past few years since she’s been dusted. After a little catch up, Tyler sends Monica to help FBI Agent Jimmy Woo, who we’ve seen in the Antman movies. Once they meet, Jimmy tells Monica about the strange mystery of Westview, a town that none of the locals seem to be aware of. After sending a drone into the town and watching it disappear, noticing there’s a force field around the town, Monica goes to investigate some more, until she herself is sucked into the forcefield.

S.W.O.R.D. gets heavily involved after Monica’s disappearance, helping the FBI but also to look for their own. Darcy Lewis from the Thor movies gets involved and is the one to figure out that Wanda is broadcasting her reality like a T.V show. They try communicating with Wanda but fail, and at the end of the episode, Monica is thrown out of the forcefeild into the real world and tells them, “It’s all Wanda.”

What’s most compelling so far is the fact that Darcy and Jimmy are asking the same questions as the viewers. (Why the hexagons? Is Vision alive?) They are trying to figure out what is happening just as much as us, which creates a connection between the characters and the viewers.

We also get a better idea that Wanda is losing her mind when we see dead Vision walking around and she freaks out for a moment, then uses her powers to make him look normal. She’s created this sitcom reality to cope with Vision’s death, which is obvious, but this scene really brings it home when you realizes she’s losing her grip little by little.

The last part of this review I want to cover are the leaks that came out, full clips from the big Halloween episode (episode six). I won’t talk about what’s in the clips (although there’s a very interesting actor they seem to have brought in,) solely out of respect for those who don’t want those big spoilers. Marvel is angry, though – so angry that they fired the person who leaked the clips, are now suing them, and are supposedly rumored to release episode five AND six this coming Friday. We’ll see if that’s true or not.

Well, that’s all I have for this week. “WandaVision” is still going strong, and now focusing on different aspects of the story at hand. Catch “WandaVision” on Disney+.