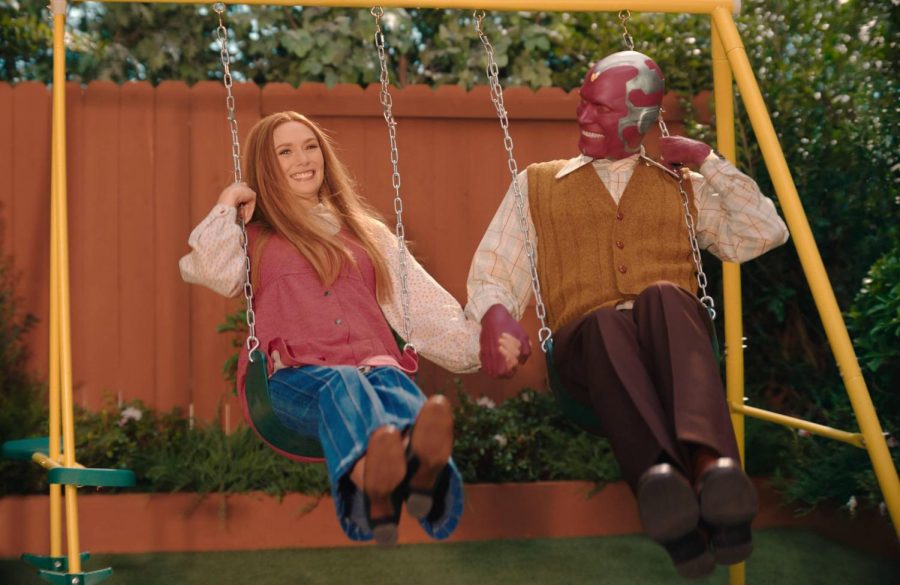 We’re back! Episode 3 was released last Friday, and oh boy, did we get a treat. Welcome back to the Beacon’s weekly “WandaVision” review. We’ll be going through quite a bit today, taking a look at the further development of the story and the three new characters that are introduced. Just a warning: at the end of this review, there will be information that can be viewed as spoilers. But I’ll let you know when we get to that part.

First, let’s start with the T.V. reality aesthetic. In this episode, we’re taken to the era of groovy beats and disco, the ’70s. Characters are wearing silk, baggy, colorful clothes and jivin’ with fancy hairdos. The sets are just as cheerful as the clothes, making for another impressive feat by Marvel and Disney, keeping to the style they are targeting while changing it up for each episode. We’re given a “Brady Bunch”-type intro that sings true to what they’re going for, once again.

As for the story, this is where things get interesting. On the outside, the story walks through Wanda’s sixteen-something-hour pregnancy, in which she goes through each trimester in a matter of hours, then gives birth to two extremely important characters. Before we touch on who those two are, there are a few things to cover first.

The quirky chemistry between Wanda and Vision becomes increasingly effective in the narrative, giving the viewer a few laughs while also making for moments of asking, “What just happened?” One of these moments is when Vision starts questioning the reality that both of them are in, asking about the neighbors and how they got there. But then there’s a quick hard cut (that is extremely obvious), and the scene goes back to a point before Vision starts talking, but this time there’s no mention of the strange issue he spoke of before. This type of scene helps paint a better picture for the viewer that nothing is as it seems, but it also reveals qualities of both Wanda and Vision.

Next, Agnus and Herb are barely seen in this episode, but when they are on screen, we are given more information than one might expect. I won’t go too much into detail about what that is, out of respect for people who don’t want to be spoiled, but the point is that Marvel is handling all of these smaller characters in the show with great ease and passion, even if they only have a minute of screen time in the episode.

The next part may be considered spoilers to some, read with caution.

Now, onto the three characters that I mentioned before. First off, Wanda’s children: Billy and Tommy Maximoff, a.k.a. Wiccan, and Speed. We also meet Monica Rambeau, from the early ’80s era of Marvel comics.

These characters open up plenty of new possibilities for the Marvel Cinematic Universe to dive into, but one of the obvious ones would be mutants and the Young Avengers. We already know that Kate Bishop will appear in the “Hawkeye” series as a significant character, so now, with Wiccan and Speed, the Young Avengers seem more and more likely. As for Monica, we could possibly see “Nextwave: Agents of H.A.T.E.,” since she was the leader of the team.

That’ll be it for this week’s review/recap before I go any deeper and lose my sanity. With Marvel and Disney keeping with the T.V. inspirations and going further along within the story, my opinion still stands that “WandaVision” is worth the watch. Catch “WandaVision” on Disney Plus.