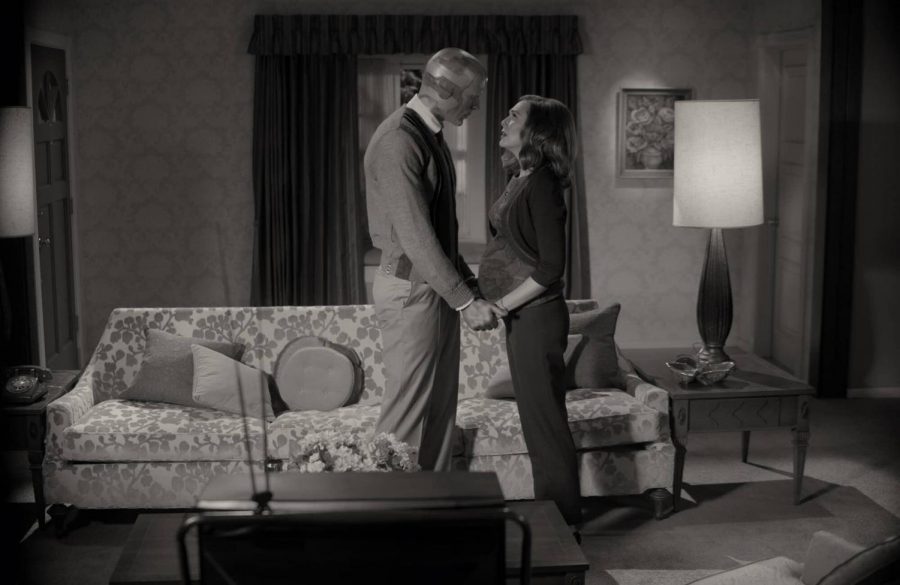 Well, Marvel heads, it’s finally here! “WandaVision” made its debut this past Friday with two episodes – lucky us! My name is Bryce Rennick and for the next seven weeks, I’ll be writing about “WandaVision.” I want to be able to take a look at what Marvel is doing with their first Disney Plus show and recap/review the episodes. I won’t go into spoilers (obviously) and won’t nerd out by going into any theories, but I’ll make sure to give a clear picture of what’s in store if you ever decide to watch “WandaVision.” With that said, let’s get into it!

First off, the “I Love Lucy” and “Bewitched” inspiration for the first two episodes really ties everything together. The “T.V. reality” that Marvel is going for shines when they take inspiration from actual shows from the eras they are depicting. The intros for both episodes were different, the first having an “I Love Lucy” or “Leave it to Beaver” feel, the second one being a direct reference to “Bewitched”’s intro. The way they filmed everything in black and white (in front of a studio audience, no less) lets you know they know what they’re doing.

Now, let’s get to the actual stories in both episodes. We are immediately pushed into their world, no explanation, no warning, just a 1950s-styled intro that tells you “something’s going on, but it ain’t right.” There are no references to the past Marvel movies, just “I’m Wanda and this is my husband, Vision, and we are completely normal.”

Both episodes deal with the struggle of both characters trying to keep their powers under control in order to not let people know what their true nature is. Some might say that this is a superhero trope, the obvious, “I can’t let people know my true identity or they will hurt those I love!” In “WandaVision,” it’s more like, “If our neighbors know what we are, they’ll hate us!” This mindset is familiar when you look at how mutants are treated in the comics, hiding their powers from the world so they won’t be harmed or hunted. This works especially well when my comic nerds remember that Wanda is a mutant herself; that detail was changed in the movies because Fox owned the movie rights to the X-Men at the time.

This conflict is key to the story in both of the first two episodes. In episode 1, we see Vision bring his boss and his wife to his and Wanda’s home for dinner, only to find out Wanda has nothing prepared. What does she do? She uses her powers but also has to make sure they don’t find her using them. In episode 2, we see Vision get “drunk” on bubblegum (I’m serious) and starts using his powers irresponsibly. How does Wanda stop him? By using her powers to counter his. This blend of inner personal issues and regular everyday problems makes for a great show.

It gets even better with the eerie, dark undertone that the sitcom world they live in might not actually be real. Wanda and Vision, for example, struggle to remember their past. Wanda sees a toy helicopter with the S.W.O.R.D. logo on it. In one scene, someone seems to be trying to call out to them over the radio. It reminds me of Sam Raimi’s style of directing, which is great because of his involvement as a director in the next Doctor Strange movie.

With the blend of real-life T.V. inspiration, interpersonal problems and those short scenes that invoke horror, one has to take some time out of their day to take a look at “WandaVision.” Marvel put a lot of work into this show, and it really shines.