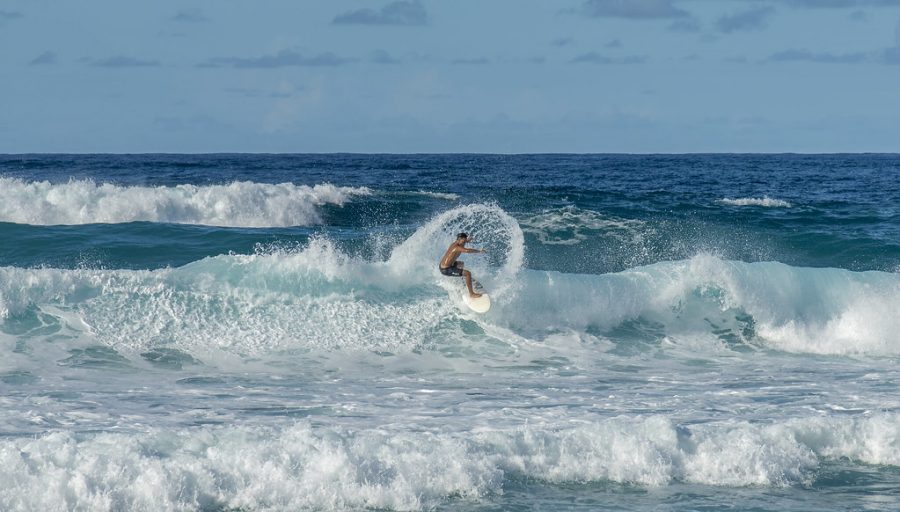 Pipeline in Oahu, Hawaii, is one of Will Green’s top 10 surf spots in the world.

It really doesn’t matter if you’re into surfing or not; if you’ve been to the beach or just live around Orange County, you have felt the presence of the surf culture that has developed over the last 50 years here and around the world. To honor the culture of surfing, I will be counting down the top 10 surf spots that you need to surf.

Trestles has always been a popular surf spot that is much appreciated by the surf community due to the fact that you have to walk or bike more than a mile just to get to the ocean. Once you’re there, it is an amazing break with always consistent waves and some nice barrels that make surfers go crazy.

Cloud Nine is one of the most powerful reef breaks you can find in the world; this is what attracts some crazy adrenaline junkies who push the limits of surfing to get the perfect wave. Dropping in on waves like Cloud Nine earns the utmost respect in the surf community.

Puerto Escondido has one of the longest surf seasons in the big wave world, stretching from March to December. This attracts many surfers to paddle out to this bone-crushing yet beautiful wave that can swallow you up or spit you right out of the barrel, earning some serious respect from the locals and the overall surf community.

This spot is often referred to as the Surf Capital of Europe. The wave can rival Pipeline with its massive barreling walls of water that pros can rip with many spectators viewing in amazement.

When this spot gets a swell, big wave surfers get a special invite from around the world to come and surf. This wave can get up to 50 feet of ice-cold walls of water that 20 or so people fight for. Some of the nastiest wipeouts you can find in surfing are made here; you need to be a serious dog to surf here because it is one monster of a wave.

This incredibly blue reef pass barreling wave is one of the most remote spots in the world. Surfers who want to get a glimpse of the blue tube have to travel far to get here, but that is one of the reasons it is loved by the people who surf it.

This glassy wave attracts pro surfers from around the world as well as beginners. Everyone can enjoy this smooth and glassy wave that is appreciated by so many people. It’s also a great wave to learn on.

This wave is easily one of the nastiest and feared waves in the world, getting up to 30 feet with deep blue bone-crushing barrels. If you are one of the unlucky people to fall on this wave, you are slammed into five feet of water, then onto a skin-scraping reef; however, if you complete this ride, you will never have a better feeling in your life.

This wave is feared for so many reasons. It is located in Great White-infested waters that can get to bone-chilling temperatures. It can be a beautiful long ride, with plenty of time to get barreled and do some pretty impressive tricks,  but because this wave is so fast, if you fall you can get pushed into some pretty nasty rocks or pushed into rip currents that are hard to get out of.

Pipeline is without question the most well-known wave in the world, and it’s easily the best too. The water is perfect, with average temperatures in the high 70s or low 80s. The reef break can produce some large waves that people like Jamie O’Brien get absolutely barreled on.