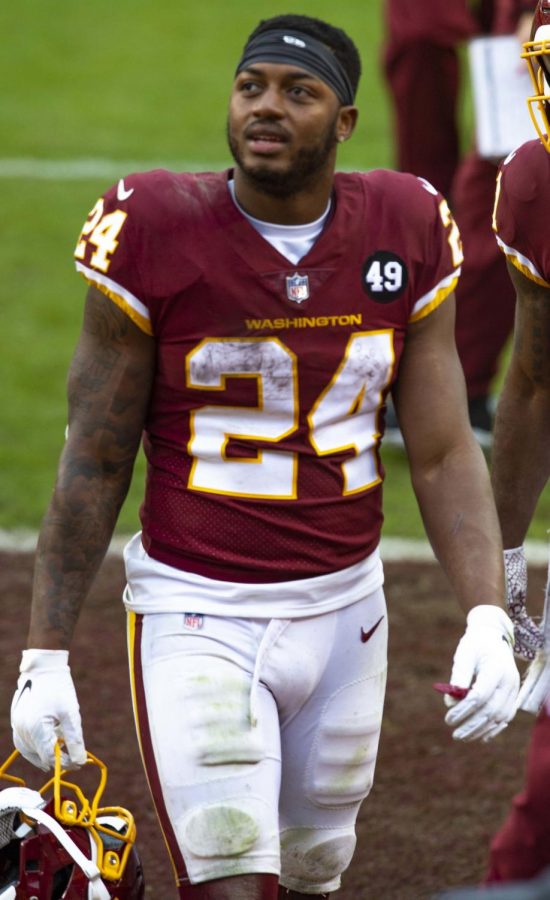 Running back Antonio Gibson has given one of the most unexpected rookie performances of the NFL seasons, says Jacob Franks.

While most are negatively affected by COVID-19, NFL rookies actually benefit. Due to the number of players removed from active rosters due to illness, NFL rookies are seeing more playing in their first year. This has given many more opportunity to prove themselves.

Harrison Bryant is a rookie tight end out of Florida Atlantic, now playing for the Cleveland Browns. At 6’5″ and 245 pounds, Bryant was taken with the 115th pick, therefore setting the bar for expectations awfully low. He came in week one with no name and caught a touchdown along with four additional catches for 62 yards. Since then, Bryant has caught an 14 more passes for 118 yards and two touchdowns. While these stats are nowhere near astonishing, Bryant was able to surpass expectations by a longshot.

Jalen Reagor is a wide receiver out of Texas Christian University. Before the draft, Reagor had a huge name until tearing his left ACL in a biking accident in 2018. This hurt his prospects of being picked top 10, eventually falling to 21 by the Philadelphia Eagles. There, he played with one of the worst NFL quarterbacks and still put up decently impressive numbers. On the season, while he only has two touchdowns, Reagor has put up nearly 300 receiving yards, which for a rookie wide receiver is impressive. While the hype has died down a bit, Reagor still managed to prove NFL scouts wrong.

Out of college Jerry Juedy already had the star potential he developed in Alabama, where he played with a talent that was unheard of previously. While I do believe he is more talented than many on this list, he was drafted 15th, setting expectations high for the star we saw in college. Juedy was drafted by the Broncos, where he played with a low-grade quarterback and the fifth-ranked worst offense in the NFL. As for statistics, he has put up 56 catches for 589 yards and two touchdowns. While the numbers may judge otherwise, Jerry Juedy has his negatives. He not only struggled with a season-ending injury but also had issues in the red zone; he only has a 22% success rate in the endzone, making him unreliable.

Even out of high school, CeeDee Lamb was a five-star draft prospect. At 6’2 and 200 pounds, Lamb is one of the biggest and best rookie wide receivers out of the draft. After the Cowboys lost their starting quarterback in week 5, he has played with four different quarterbacks and still managed to rack up 61 catches for 650 yards and four touchdowns. Taken 17th, Lamb was expected to be a star and has done nothing but live up to the hype in the NFL.

Tee Higgins is a name in the NFL that isn’t given enough credit. Higgins was a shy 21-year-old draft pick and didn’t put his name out there. Taken 54th, Higgins was nowhere near the top of the draft, surprising many who thought he would go higher. Standing at 6’4″ and a not-so-light 215 pounds, he was taken by the Cincinnati Bengals, the defending champs for the title of worst team in the NFL. Higgins played like there was no tomorrow starting week one, putting up over 100 yards and a touchdown. This continued until week 6, when he had a total of 674 yards and five touchdowns. Many expected this to continue, but in a tragic turn of events, his starting quarterback Joe Burrow tore his ACL, leaving him out for the season. Higgins’ value is at great risk now playing with a backup quarterback. Since then, he has averaged 24 yards a game with no touchdowns and one of the worst catch percentages in the league.

Out of Notre Dame, Claypool clearly had the body shape of an absolute beast. At 6’4″ and 248 pounds, he makes some NFL players look like his children. While many liked the physicality, they were worried that the football talent might not convert well over to the NFL. Because of this, Claypool fell low in the draft, picked 81st. Coming out the gate, Claypool was silent until week three, when he put up 151 yards and a rookie record of four touchdowns. After playing like this, the momentum continued as he has totalled 711 yards and eight total touchdowns. While he may not be the best, he has proven many wrong as he very well could have been a top-20 pick with this kind of talent.

Taken 22nd overall, Justin Jefferson has been nothing short of an absolute superstar. Playing behind the snap with quarterback Kirk Cousins, life wasn’t easy for the receivers, as 62 percent of his intended targets were “uncatchable.” But Jefferson came out of Louisiana State University, the reigning NCAA champions, where Jefferson’s stats were off the charts. He became a highly coveted draft pick until he began to struggle with knee tendon strains. This dropped his value just slightly as he was picked just 12th by the Minnesota Vikings. After not playing the first two weeks due to a positive COVID test, when Jefferson was finally able to play he quickly put up league-leading numbers. This trend continued; he now has the most yards among all rookies and the fourth-most in the league. He has eight touchdowns and continues to put the Vikings offense on his shoulders.

At 6’6″ and 236 pounds, nothing can go wrong drafting a player with these dimensions, and nothing did. Undeniably the best rookie quarterback active in the league, Justin Herbert has a rare talent. After being put in week three against the nearly impossible Saints defense, Herbert totalled 385 yards for three touchdowns, a rookie record for the Chargers. With the fifth pick, they knew they had gotten a star as only very few were taken before him. Out of Oregon, Herbert was a deep accuracy quarterback. While this was a benefit, many speculated that this would not convert well into the NFL. This, however, was proven wrong after week three, as he completed four passes longer than 40 yards. Herbert leads all NFL rookies in passing yards and is a likely selection for offensive rookie of the year.

If you would have asked anyone who Antonio Gibson was six months ago, more likely than not they would have shrugged their shoulders. Taken at an astonishing 156th, Gibson was not expected to have the attributes of an NFL star. While he was expected to go undrafted, the Washington Football Team took a chance on Gibson and, to the surprise of many, started him as their first-string running back. Gibson did very little until week three, when he ran for 123 yards and a touchdown. While this was impressive, it was only one week and didn’t excite many. That was until he did it again the following week, and again, and again, until he totaled 500 yards in only four games. Gibson now has a total of 759 yards and a jaw-dropping 11 touchdowns, third-most among all running backs in the league. Gibson continues to prove scouts wrong as he wears an undershirt with the number 156 every game.

There are few things worse than being picked 156th, but the worst of them all is going undrafted. That, however, became a reality for running back James Robinson. At only 5’9″ and 219 pounds, Robinson really didn’t bring seem to bring anything to the table because of his height. In college at Rockford Lutheran Academy, Robinson got very little attention for his football talent. He set one school record in receiving yards as a running back, but in the NFL that would mean nothing. Only four days after the draft, though, he received a call from the desperate Jacksonville Jaguars, who signed him to a three-year, six million dollar contract. In the first few weeks of the season, Robinson did nothing and balanced on the edge of being cut. He knew he had to prove himself, however, which he did during week , running for 80 yards and a touchdown. Since them, Robinson has gotten at least one touchdown in each game and leads the NFL in rookie touchdowns at 13. He has 954 rushing yards and has transformed into an animal. As Robinson said, “Undrafted is just where I started. MVP is where I end the journey.”