As Harbor Goes Hybrid, A Mix of Excitement and Concern 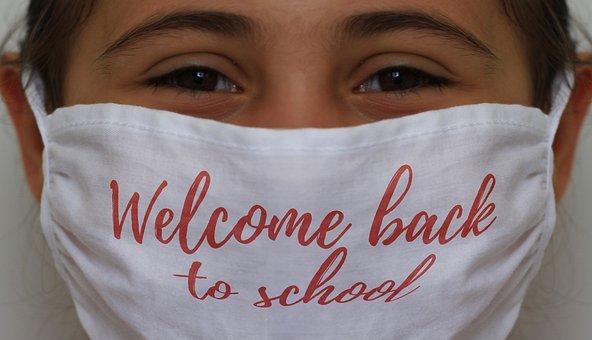 After more than two months of distance learning, on November 9th the secondary schools across Newport-Mesa Unified School District reopened under the Level 2 hybrid model.

At Newport Harbor High School, students have been split into three cohorts, one of which will continue online learning full time, while the students in the other two cohorts will meet in-person twice every week, either on Tuesday and Wednesday or on Thursday and Friday. To ensure the safety of staff and students, all are required to wear masks and maintain six feet of distance from others while on school grounds. Furthermore, in-person gatherings, like club meetings, will not be allowed.

While some are still apprehensive about the transition to hybrid, especially with regards to the safety procedures, others are excited to return to campus.

On October 23rd, a few dozen parents, students and community members gathered outside the district office to rally in support of reopening schools. One of the speakers, Newport Harbor parent Anna Ackerman, said she believes in-person education is essential, and that her kids have lost the experience of being able to go into ninth grade, socialize and meet new people.

“Now, they just stay in bedrooms all day doing tons of homework, instead of being able to go to school and truly experience high school,” she said.

Ackerman has also noticed her children’s mental health being affected as they are no longer able to meet new people.  She feels the lack of communication is a big deal and it has affected them emotionally and educationally.

Grace O’Brien, a senior at Newport Harbor High School and an attendee at the rally, stated that she wants to return to campus because it is better for students’ mental health. The social interaction — even if it is six feet apart — is important, she added.

Another concerned parent, Casey Garcia, said she has seen her kids prosper in regular in-person school. Right now, even if they are still doing perfectly fine, she can tell there is still a difference in terms of their happiness. Academically, even if they do have good grades, she feels this doesn’t reflect what they are actually learning; Garcia doesn’t believe they’re getting much of an education through Zoom.

“Right now, we have students that get by without doing any work,” he said. “The whole online learning is a massive loss in education. And generationally, we are going to be in bad shape if half of our students are poorly educated. This is the main reason I want to get back to school, back to productive learning.”

Students also feel they are missing out on the high school experience. Extracurriculars are a big part of the high school experience, said sophomore Kylie Papa, and they are missing right now. As an example, she stated that it is hard to run club meetings online because of the limitations of Zoom. Furthermore, some clubs are based on in-person activities like volunteering, which students cannot engage in in an online setting.

Still, there are many others who are concerned by school reopening, and some who feel the district has not done an adequate job in drafting its reopening plans.

Mr. Constandse, a science teacher at Newport Harbor, explained that although he is not against school reopening, he thinks the district’s proposed plan is not fully thought through.

One issue, he said, is that the current plan does not make any accommodations for teachers who have viable reasons for not attending school. There are many older teachers throughout the district, as well as some cancer survivors, whose immune systems have been compromised. For them, returning to campus is a health risk.

The district has said that they gave teachers the opportunity to transfer to the Cloud Campus, where classes are fully online. However, Mr. Constandse said he feels that is not a solution; it is like telling someone facing online bullying, that the solution is to stop using the internet, he stated.

“What do I have them do while half of the class is doing the lab in person? It is not fair to them to just watch their in-person peers complete the lab,” Constandse said.

That means he has to come up with a completely different lesson plan for the asynchronous learners, increasing his workload.

Still, Constandse said he believes that if the school is reopened and done properly it can really help his students, especially the freshmen, whom he can help learn the basics and adjust to high school. With hybrid schooling, he will also be able to give in-person tests, which will minimize cheating.

Jeffrey Yip, a senior at Newport Harbor, is also concerned about the transition to hybrid. His primary concern is safety. Yip said he thinks schools can act as spreading grounds for COVID-19, mostly because he feels that not every student will follow the district’s safety rules. Also, since the ventilation systems are fairly old in some buildings, he worries that COVID-19 can spread via the air.

As a result, Yip said he believes that once COVID-19 enters NMUSD campuses, it can spread quickly. Plus, since the virus is still present in our community, there is a good chance that it will actually come onto campus.