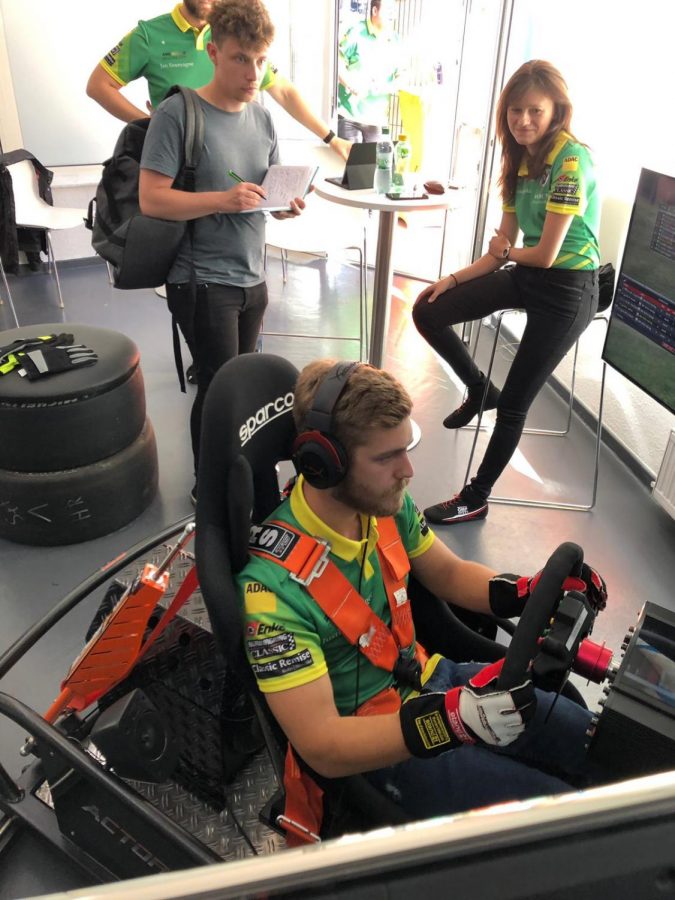 A driver participates in a sim racing competition in 2019. This year, the pandemic has forced professional races to go virtual.

The traditional ear-piercing scream and ground-trembling growl of race cars was as much off the racetrack as on it this year. Typically, race cars are exclusively raced by professionals on series-sanctioned tracks, but this year, it was just a little different.

As we all know, 2020 has been the home of many unexpected, unfamiliar and unprecedented events. Many racing seasons across the globe kicked off just like any other year in January and February, finishing their first races before the pandemic hit. However, the 2020 Daytona 500, the first race of the NASCAR season, ended in classic 2020 fashion, with veteran driver Ryan Newman being transported to a hospital after a vicious crash when competitor Ryan Blaney spun him out; Newman slammed into the wall, flipped upside down and was hit on the driver’s side by competitor Corey Lajoie, sending him careening into the air in a shower of sparks. And that was only the first race.

As that was happening, COVID-19 was spreading around the world. It became unsafe for teams to operate at race tracks under normal conditions. Racing series across the globe had to close the garage doors and postpone or cancel their seasons.

So what was the solution? For years, aspiring professional drivers have been racing, whether casually or competitively, on simulations. iRacing, Assetto Corsa, Project CARS 2 and rFactor2 are some of the more hardcore simulators that even the general gaming population, let alone Newport Harbor students, is unaware of. Professional drivers started individually moving from their race cars to those simulators, especially iRacing, to maintain their skills and do what they love most. Soon after, the official series jumped on the bandwagon over to iRacing because it became unsafe for race teams, drivers and officials to be crowded into tracks for the time being. NASCAR and IndyCar are some of the most well-known racing series starting up virtual “invitationals” with a short, exciting season.

NASCAR’s Pro Invitational kicked off at the virtual Homestead-Miami, on the iRacing service, with most of the current NASCAR drivers and a few retired drivers jumping on their unique simulators at their respective homes. The race was more of an experiment than anything, and the finish was a thriller.  The Pro Invitational was also aired on Fox Sports, with the help of one of the drivers, Clint Bowyer, who was actually racing in person. Bowyer provided commentary and occasionally shared his thoughts while he was racing on track. Many have predicted that after the veteran retires, he will jump into the Fox Sports booth and start announcing races.

The NASCAR drivers didn’t take the whole thing too seriously, but there still was some intense racing, and most maintained professional attitudes. Two standout drivers who were very familiar with the simulators, iRacing specifically, were Timmy Hill and William Byron. Both of them, at the time, were seeking their first career wins in real life. Recently, Byron won the night race at Daytona International Speedway, just a few weeks ago. The Pro Invitational was a solid success to keep TV ratings up and fans entertained during the pandemic.

The INDYCAR iRacing Challenge was very competitive, and drivers took it seriously. They knew they had to produce great racing, because Indycar does not have the platform or fan base that NASCAR has. However, some drivers who entered were not INDYCAR drivers, and one was not even racing on the same continent. Australia’s Scott McLaughlin is a V8 Supercar driver, and he entered the INDYCAR iRacing Challenge. V8 Supercars race exclusively in Australia; they are essentially like plucking the car out of your driveway and throwing a powerful engine into it, plus maybe a rear wing. The point is, they have nothing in common with Indycar. The interesting thing about sim racing, though, is that users can drive any car they want, at any track you want. Scott McLaughlin is a classic example of this.

As for the races themselves, young simulation veteran Sage Karam found himself in the leading position. The races were around one hour long, and the racing was hard and intense. The drivers took it seriously, with little error and no tempers flaring. It was a refreshing experience to see familiar faces taking a simulation seriously as a substitute for real life Indycar races.

Unlike in real life, both major series now had equal cars, where everyone was using the same equipment, with no real advantage over other teams. Therefore, the action-packed races were always exciting. Nobody in 2019 saw the pandemic coming, but they also didn’t see retired Dale Earnhardt, Jr., battling for a NASCAR victory. This was a big moment for racing and an enormous moment for sim racing, and it was everything except disappointing.