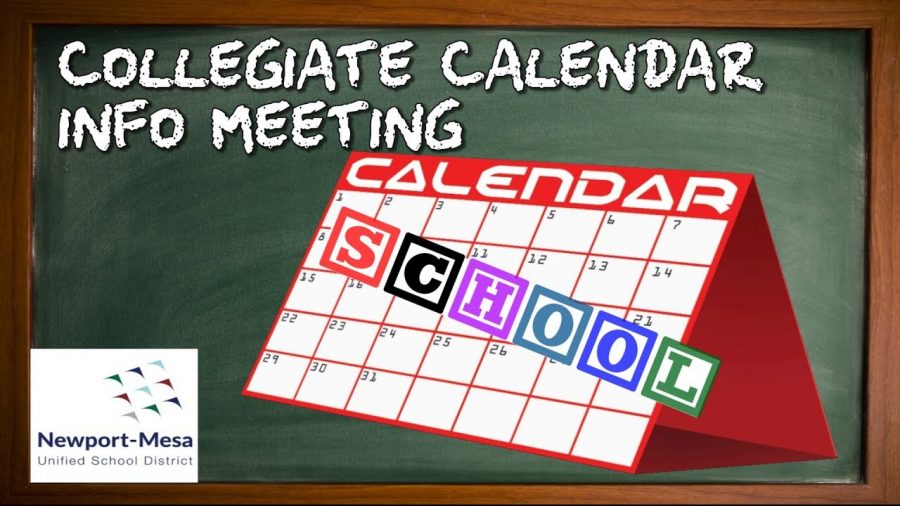 Lately, rumors have been spreading that the Newport Mesa Unified School District is considering a shift to the collegiate calendar.  This would include school starting three weeks prior to Labor Day and have first semester ending before winter break. This would allow the school to coordinate more closely and align with neighboring districts and local colleges. The alignment would be greatly beneficial to fall sports as their seasons and games would begin at the same time as other districts, making scheduling games and tournaments much easier. Administers also think that moving the calendar would be an advantage for the students, as there would be additional time to study for Advanced Placement/International Baccalaureate tests and providing final transcripts to colleges faster.

Most schools outside of California are also set to the collegiate calendar, and many colleges start early as well. However, these schools do not have the break over presidents’ week – more commonly known as “ski week” – that our district does.

Many parents and students seem skeptical of the adjustment, as making the semester end in December adds to the stress of the holiday season and busy schedules. They also do not think the benefits of the shift are important enough to pursue this change right away. Parents and students alike are concluding that the pros do not yet outweigh the cons.

As changing the calendar impacts all students, the Newport Mesa Unified School District is conducting many surveys and questionnaires to get a better sense of the community’s opinions regarding the shift. They want to gather input before making any drastic decisions, which is quite understandable. Even if they do end up moving to the collegiate calendar, the earliest that the shift could be made is not until the 19-20 school year.

At the moment no acts have been made to adjust the schedule, but the district has hosted many meeting and has been speculating the idea for a long time now. Only the future will tell if this shift in academic schedule will be beneficial or have repercussions… and that, is only if it it ever happens.