A Spirit Night To Remember 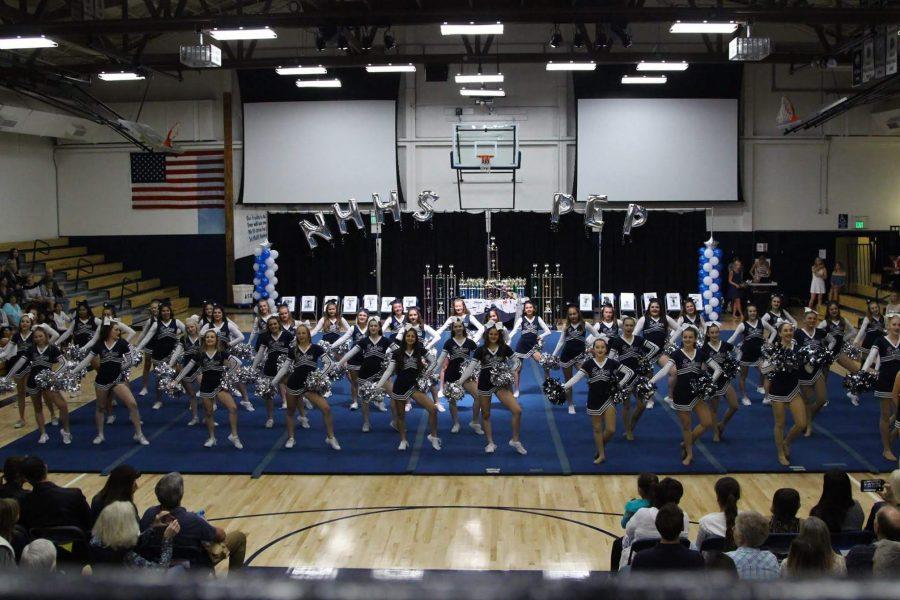 Every year the NHHS Pep Squad works hard to promote spirit on campus by attending numerous sports events, performing at rallies, and enduring weekend competitions. Their support for the school’s athletes is endless, whether

they’re making posters for their basketball buddies or they’re on the sidelines cheering on football players. But there’s one night out of the year where the team gets some cheerleaders of their own – Spirit Night. It takes place in the main gym and showcases all of the routines performed by the cheer, song, and baton teams throughout the school year. There are even some numbers put on by local preschool and elementary groups as well as a competition routine from the Ensign Seabees. Newcomer to the team, freshman Madelyn Ocana felt that the evening of Sailor Pride required an immense amount of dedication to make happen. “A lot of work went into the performance. We worked for days to get the routines right and make sure we all knew them, but in the end I think our hard work really paid off,” she explains. The girls learned multiple sideline dances and competition routines during their summer practices and had to remember all of them when their big showcase arrived. “We need to review routines from the beginning of the school year and create new routines in a limited amount of time, but it is so exciting to perform in front of everyone so they can see how hard we have been working,” says sophomore baton twirler, Zoe Gleason.

However, this year the event was very special, because a portion of the show served as Senior Night and honored the thirteen graduating Pep Squad members that had been a part of the team since they were freshman. Each girl was escorted by her family out onto the gym floor and received a bouquet of flowers as a video of them that was filmed earlier that day played, sharing their favorite memories of the team and their aspirations for the future. There was also a slideshow of photos dating back to as early as their freshman year, which reminded them of all of their favorite moments they experienced with their teammates. “I will miss the relationships I’ve made with all the girls, especially the sophomores on my team, because they are like my little sisters,” shares senior varsity cheer captain, Margaux Brook. It also made many of the seniors realize that being a part of the team taught them more than just skills needed to stunt or tumble. For senior Cassidy Peterson, her role as overall Pep Squad captain and her four years on cheer have helped her attain skills for the future. “Being captain is more than just being a leader, it is being a friend or a person who could offer a helping hand, a shoulder to cry on, or even just someone to be there for her teammates

. It is the most important part of leading a group of individuals to give their all to the team and work as a family to ensure the success and happiness of the entire team.” The lessons she learned as a member of the team will follow her well into the future.

Although, Spirit Night was already a very emotional time for the seniors and the teammates they’re leaving behind, it became even more so when it was announced that veteran Coach Amanda Pabon would also be saying her final farewell. As niece of the Pep Squad advisor and former high school cheerleader, Amanda coached every team from Ensign cheer, to JV, and varsity, but now she is on the road to becoming a school teacher. Many of the senior girls ran to huddle with Amanda in a group hug, each one in tears but also very excited for the changes in the near future. Margaux Brook went on to say that she was emotional over Amanda’s farewell, but also pleased that she was able to have her as a coach for four years. “I’m really sad about Amanda leaving, because she’s been in my life since freshman year, but I am happy that she is leaving as I am graduating.”

Spirit Night was an evening of entertainment, Sailor Pride, excitement, and emotional goodbyes. Though the event was one of last Pep Squad performances of the year, the memory will stay anchored with the team members for many years to come.