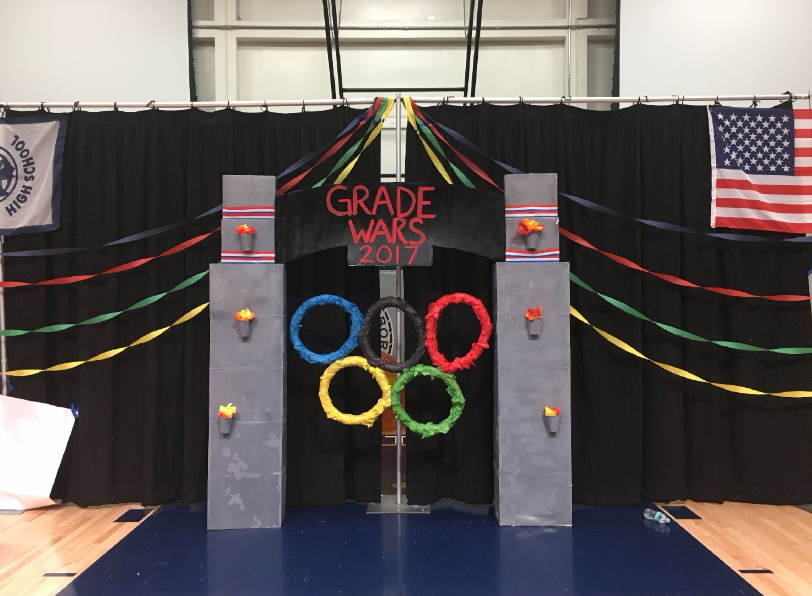 Once a year, a group of students from each grade join together to compete in a series of events during an assembly. ASB worked hard the past couple weeks to put the props and games in order for this assembly. Paige Warmington, a junior on ASB, said that “ASB did a good job managing [everything] in the short amount of time we had to prepare” and the best part of the rally was “definitely the class involvement because it gets everyone hyped about going to Harbor.” All of the competitors enter the competition hoping to bring glory to their grade. The participants competed in a total of three main events: the hungry hippos game, apple tea game, and the trash can game.
To compete in the hungry hippos game, each team is given a skateboard, bucket, and large trash bin. One participant pushes the other, who is laying on the skateboard, and they have to capture as many small balloons as possible using their bucket. The seniors brought home the win in this game. In the apple tea game, two participants, each from different grades, are attached together by a bungee rope and they face opposite directions. One participant is attempting to grab an apple off of a baseball-batting tee using only their mouth, while the other participant is running in the opposite direction. In the girl’s round, the juniors won but in the boy’s round, the seniors won leaving the score to be 2-1 with the seniors in the lead.
The final game, the trash can game, involved people from each grade in a circle around a large trash bin holding onto each other by a rope. The object of the game was to pull people using the ropes so that they hit the trash bin. If you hit the trash bin or fell over, you are out of the game. The junior boys dominated against all other grades and the so did the junior girls during this game. The two wins from the juniors during this game put them ahead, 3-2. The junior class won the grade wars 2017! The winning class from these competitions then competed in a relay race against the staff team. To complete the relay race, participants had to first complete a bottle flipping challenge, where they had to flip and land a water bottle, cone, and trash can. After flipping all of these items, the participants then had to run and knock down boxes while in an inflatable hamster ball. The final step of the relay race was to throw and make “baskets” into multiple cans. Whoever completed the relay first wins. This was a very exciting rally because it was one of the first times the juniors have ever beat the seniors in Grade Wars!
Written By: Ava Glassen & Carly Yasko