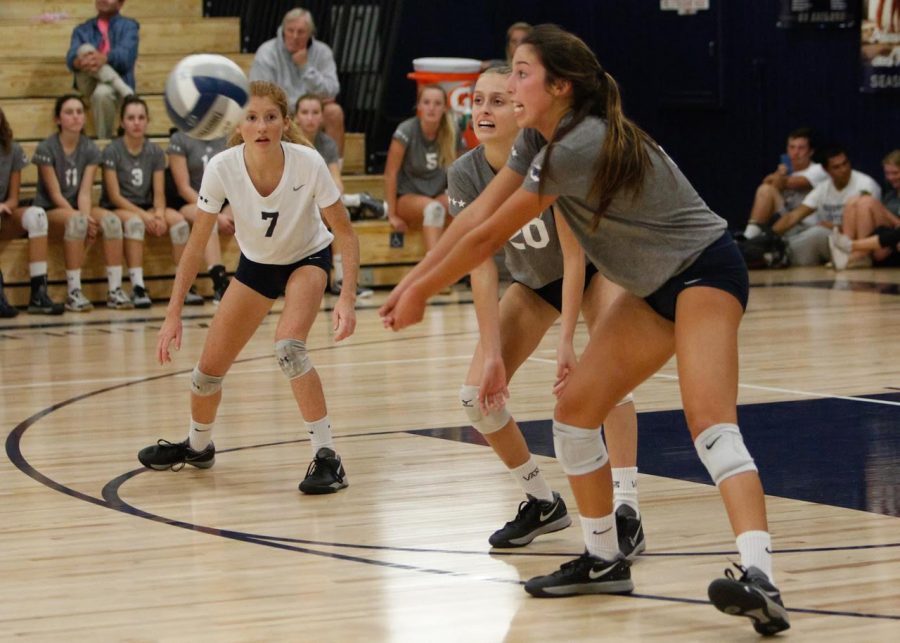 As the fall season sports are unfortunately coming to an end, the Newport Harbor Varsity Girls’ Volleyball team continues to demonstrate an amazing amount of effort and poise within their games. Despite the loss of their second to last (home) game of the season against Edison High School on October 18th, the girls maintained their sense of determination, cooperation, and sportsmanship throughout all three matches.

The volleyball players began by getting ready w

ith different types of techniques to prepare themselves for the game. Edison’s girls mirrored Harbor’s on the opposite side of the court with similar strategies. The girls managed to unwind and ease their nerves while warming up before players from both sides were properly introduced and the first match, of five, officially began.

Edison took the lead of the first match, 8 to 1, before Harbor made their second point. Claire Covina, #5, hit a remarkable spike against Edison that landed on the boundary line, confirmed as Harbor’s third point by the referee. Although Harbor’s girls continued to work hard, Edison created a major gap in the lead at 20

to 6. During Edison’s match point, Harbor’s attacking players were unable to block their opponent’s strike, establishing a domina ting win by Edison with the score of the first match, 25 to 9. Claire Covina, #5, starts the second match with a point for Harbor. Harbor’s girls, working hard together, blocked Edison’s shot, making the score 9 to 6 (Edison’s lead). Both teams played an amazing rally, un

til Claire Covina, #5, ended it with a point for Harbor, still behind at 9 to 16. Slowly, they started making a comeback, Edison still in lead, until Harbor unfortunately lost the match when their ball went into the stands. Edison led the third match 6 to 3, before Harbor made their fourth point. As Harbor’s ball shot high between the bars on the roof, Delaney Decinces, #15, and Jasmine Amirie, #15, continue to play a remarkable rally and try their best to get the ball over. Edison fights back and creates a 6 point streak before Callie Govaars, #24, breaks it with a point for Harbor, 12 to 20. Edison continues to score, winning the match 25 to 17, therefore winning the game.